A PAEAN TO ALL THE GOOD PEOPLE OF HONG KONG

(Hong Kongers have been celebrating the Lunar New Year, also known as Spring Festival, the biggest holiday of the year and my thoughts turn to the city from where I moved a year ago after a total 16 years’ stay and to the wonderful people I’d got to know.)

Many people, including some Hong Kongers, have at times dismissed its residents as merely money-minded. Such generalisations of people anywhere are likely to be off the mark: In Hong Kong’s case, spectacularly so.

I confess there was a time when I joined in sniggering in assent when this alleged money-mindedness of Hong Kongers was mentioned, but over time got to know vast numbers of people whose interests were far removed from money-making. Rather, they were passionate about humanitarian action, human rights and the rights and welfare of non-human animals.

Those who see Hong Kongers as focused entirely on earning and spending need to consider:

June 4 Candlelight Vigil: Some hours after the Chinese armed forces crushed the “Beijing Spring” and cleared Tiananmen Square of student demonstrators in 1989, more than one million Hong Kongers held a candlelight vigil. (Hong Kong’s population was then about 5.7 million.)

Since then every June 4 evening, Victoria Park, the size of a few football stadia, gets packed with people, entire families often wearing black, holding candles listening to messages of support from Chinese activists around the world and singing songs.

In recent years, some mainland Chinese visitors too are said to be taking part in the only such commemoration in a Chinese city.

So concerned at putting up a decent show are the participants that dozens of people scrape the candle wax off the grounds following the vigil, to leave the park as clean as they found it.

The July 1 Rally: When Hong Kong’s undemocratic government was preparing to adopt in 2003 a sedition bill that would have meant curtains for many of the freedoms the city still enjoys, about 650,000 people rallied. Meaning, nearly one in ten Hong Kongers then marched three and a half kilometres (more than two miles) in scorching heat from Victoria Park to Government House.

That rattled a pro-Beijing group whose main constituency is the business elite, and which has a stake in preserving a semblance of the rule of law in Hong Kong. The Liberal Party pulled its support and the bill fell through. Since then, every July 1, many groups join together to restage the rally as a pro-democracy exercise. In 2012, an estimated 400,000 people took part.

Human Rights and Humanitarian NGOs: Hong Kong is one of only two cities with a predominant ethnic Chinese majority (the other being Taipei) able to host a range of human rights organisations. Most are underfunded, with overworked staff. Many do a superb job of championing rights, especially the right to freedom of association and to form trade unions in a continent where such rights are routinely trampled on.

The Asian Human Rights Commission is based in Hong Kong as is the Asia-Pacific office of Amnesty International. Among the best-run NGOs is China Labour Bulletin, which has reasonable working hours for its staff and produces regular and informative reports. (Disclosure: I have edited a number of CLB research reports.) Asia Monitor Resource Centre is another which takes a continent-wide approach to labour issues.

A large number of people fleeing dictatorial regimes land in the city. Organisations such as Hong Kong Refugee Advice Centre and Christian Action help them cope while they await processing of their cases.

Rain Lily is a crisis centre for women who have suffered sexual violence and has rendered quiet but yeoman service.

Though not an NGO, the law firm Barnes & Daly deserves praise for having courageously taken up cases of refugees in Hong Kong.

One Person Pro-Democracy Army – “Long Hair”, or formally, The Honourable Leung Kwok Hung (梁國雄), Member of the Legislative Council, Hong Kong Special Administrative Region: He is one of Hong Kong’s perennial protestors. Few days go by when he’s not confronting the authorities on some issue or other to do with people’s livelihood, collusion between tycoons and the governments in Hong Kong and Beijing and the lack of democratic rights. 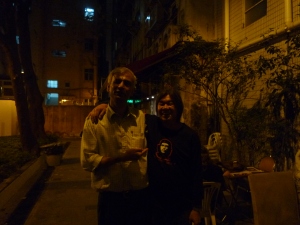 “Long Hair” is the enfant terrible of Hong Kong. Frequently at odds with the police, often hauled before the courts, he is defended by eminent senior counsels such as Martin Lee, Gladys Li, Paul Harris and Philip Dykes, because the issues he raises touch everyone’s fundamental rights – freedom of assembly, right to stage peaceful protests and freedom of opinion, as well as daily bread issues that affect the poor and middle classes.

Some months ago “Long Hair” posted on Facebook a picture of himself in a suit. Most people would hope he’ll never join the suits but remain a thorn in the authorities’ side and a doughty rabble-rouser for democracy and human rights.

One Person Anti-Racism Army – Fermi Wong Wai-fun  (王惠芬): The way Fermi tells it, affluent members from among the ethnic minorities in Hong Kong are so apathetic about the racism prevalent in the city that they neither participate in nor contribute materially to the campaigns and efforts to help the indigent among them or campaign for fair treatment.

Fermi and a few associates, coming together under the UNISON banner, have waged indefatigable struggles to get racial discrimination outlawed. A Race Discrimination Ordinance has at long last been passed.

Fermi’s ever-smiling and effervescent presence at meetings and her usually cheerful posts on social networking Internet sites belie the fact that she tires herself out combating the negativism her chosen mission entails. She remains a beacon of inspiration.

One Person Labour Rights Army – Debby Chan Sze-wan (陳詩韻): Also associated with other larger human rights issues: Tian An Men Mothers and the human rights of the people of Tibet and Burma, to name but two.

Debby’s self-effacing nature and apparently hesitant smile when she speaks at meetings might mislead inattentive members of the audience as regards the seriousness of the issues she raises. But most seminarians and conference delegates tend to see beyond her diffidence and weigh the strength of her words which pack a punch.

Debby and the group she has represented – Students and Scholars Against Corporate Misbehaviour – have drawn the attention of media the world over to the exploitation of workers in China by both local and foreign investors.

She is among those who have questioned Han Dongfang (韓東方), who heads China Labour Bulletin, over his call for a degree of cooperation with China’s official “trade union”. But these are honest differences over strategy, respectfully aired and discussed.

One Person Domestic Workers’ Rights Army: Doris Lee (李恩珠)): Doris has previously featured in this space (https://walkerjay.wordpress.com/2011/09/29/a-hero-in-our-midst/) for her work as an employer of a foreign domestic worker and who likes to treat people with dignity. 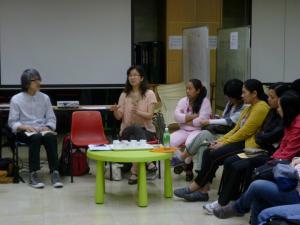 There are a number of associations and unions of domestic workers from the Philippines, Indonesia, Thailand and Nepal plus Helpers for Domestic Helpers, all doing good work in combating the multiple problems of poor pay, long hours, exploitation, abuse – including physical abuse – and official discrimination contrary to international human rights norms.

But where Doris stands out is in trying to impress upon employers to treat domestic workers with dignity and in fairness. She has her work cut out: Not only are most employers of domestic workers yet to hear her, there are lobbies opposed to fair treatment and for the continuation of the current hugely unjust status quo which have grave consequences for the workers and their families back home.

The association she established, Open Door (http://opendoor.hk/), is gradually helping Hong Kong’s good employers come together and speak out as a group.

Cat Ladies (and Gentlemen too): Almost all of Hong Kong island and vast parts of the Kowloon peninsula are devoid of independent dogs. But as most localities are old – or even if they have given place to high-rises – the residential areas at least have lanes and tiny parks or sitting out areas hosting small numbers of independent felines.

Most evenings, cat ladies go about placing some food for them. Sometimes it is a couple, a husband-and-wife team perhaps – and I’ve certainly seen men too – leaving wet and dry food in places frequented by cats.

This elderly lady is a constant every evening at Peel Street, Hong Kong. Bent over, leaning on a stick and carrying bags of food for cats, she goes from alley to alley, calling out to her tiny friends and offering them food.

Curiously, few cat ladies and gentlemen in Hong Kong touch the felines or play with them. One couple explained to me that it was deliberate: they do not want the cats to get familiar around humans, many of whom are hostile to felines.

A good friend, Si-si Liu Pui-shan (廖珮珊), is both a human rights activist and cat lady, as are many members of hkalleycatwatch.

People Who Clear Up After Their Dogs: I disapprove of confining cats and dogs in tiny flats (apartments), but can see that many humans are so attached to them and so caring that it would be cruel to forbid such intra-species relationships in cities. In Hong Kong, the government has gone after independent canines so ruthlessly that in places including the whole of Hong Kong island, and much of southern Kowloon, there are no independent dogs.

On the streets one meets only the dogs cared for by humans. As Hong Kongers in general do not encourage conversations with strangers, one is rarely able to commune with a canine in Hong Kong but the few occasions one is able to are times of great mutual pleasure: the dog finding that some strange human is willing to give much time and manifest affection in the form of pats on the forehead, strokes on the back, scratches around ears and so forth.

One praiseworthy chore Hong Kongers walking dogs carry out is to clean up after the dogs. Most people walking dogs can be seen with neatly cut pieces of newspapers in one hand, perhaps also a bottle of water, and the leash in the other.

The moment dog lifts leg at lamppost, fire hydrant or tree trunk, water is splashed to reduce the acidity and stains. And when canine stops for, er…, grand besoin, pieces of newspaper are thrust underneath, the deposits collected and consigned to one of the ubiquitous bins in the city or to special receptacles for dog offerings.

As I’m from a country where hundreds of millions of humans lack proper toilet facilities, I beg indulgence for this focus on the toilet arrangements of Hong Kong’s canines.

A word about the alleged money-mindedness of Hong Kongers: In a city whose government is controlled by property tycoons (with direct lines to Beijing) who’ve corralled the middle class into developing a vested interest in the property market through mortgage payments, where a grocery chain duopoly keeps prices high and limits choice, and where the indigent too have to spend the same as the very rich on some daily essentials such as food, shelter (some of the poorest pay more per square foot as rent than the rich) and transport, it is a wonder that there actually are a large number of people who care about the society around them and about such things as democracy, human rights and about non-humans.

The author, N. Jayaram, a journalist now based in Bangalore after more than 23 years in East Asia (mainly Hong Kong and Beijing) and 11 years in New Delhi, was with the Press Trust of India news agency for 15 years and Agence France-Presse for 11 years and is currently engaged in editing and translating for NGOs and academic institutions.
View all posts by walkerjay →
This entry was posted in Uncategorized and tagged Debby Chan, democracy, Doris Lee, Fermi Wong, Hong Kong, human rights, Leung Kwok Hung. Bookmark the permalink.